On Sunday 7th July our 50 strong team of juniors travelled to Sandringham, home of the Queen, to compete in the final of the 2019 Yvette Baker Trophy.

It was an early start from Sheffield but the coach made good time and by 10.30am the team were setting up camp in the assembly field ready for the competition. While the juniors chilled and prepared for the races with nail and face painting, the adults rushed straight to the start to complete their runs prior to the start of the competition. Sandringham is a lovely woodland with very little bramble cover but the heavy rain followed by warm sunshine over the past few weeks has provided very fertile conditions for bracken growth! What would be a very easy control normally is significantly harder when you need to navigate your way through head high bracken and a number of the adults recorded some rather long times! At least we could console ourselves that we were creating elephant tracks for the juniors!

Our first juniors started just after 12.30 and it wasn't long before our yellow runners began streaming confidently into the finish, followed shortly by the first of our orange runners. As time passed we had lots of yellow, orange and even green course finishers but no light green competitors! Eventually though, to our relief, they started to return. The light green course was incredibly challenging in the bracken and early light green runners did not have the elephant tracks that the green competitors had. Towards the latter end of the competition the times speeded up thanks to the early runners forging the trails to the controls!

By 2.30pm all our runners were safely back and there was just time for ice-cream before the start of the prize giving. The Shield competition for smaller clubs was won by SOS with PFO in 2nd and HOC in 3rd. Then it was time for the trophy results......HH were announed 3rd in with 862 points, SO in 2nd with 880 and......for the 3rd year in a row.....SYO were announced as champions with a score of 897 (out of a possible 899)!

As soon as the prize giving was over we bundled onto the coach for the long journey back to Sheffield. However, the celebrations continued on the coach with lollipops (thanks Dave) and the purchase of a new club mascot - Billie the Bee! 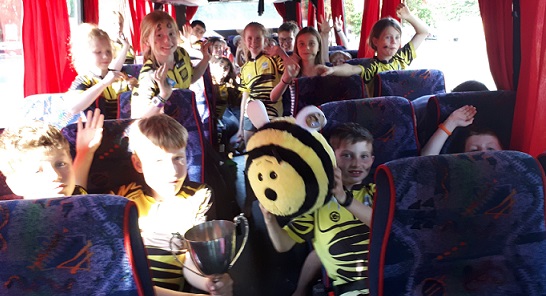 Congratulations to our 9 scorers:

However, a huge well done must go to the whole team because even if they didn't score directly for SYO they helped push down the score of our competitors. Perhaps the most impressive statistic was that we didn't have a single retiral or mispunch and every single junior completed their course!

Thank you to all the parent supporters and particularly team captain Jacky. Next year's final will be held in the South West on Sunday 5th July 2020.

Check out the Trophy in our Trophy Cabinet!