Results, Winsplits and Routegadget now available from the links above. For those that missed control 50 due to its various adventures with some of the locals, we have re-instated you.

Ranking Points are now available from the following links (last uploaded Thursday): Yorkshire Urban League (click on your league category to view your points for 2018, this event was number 12) and British Orienteering Ranking Points. Please let us know if you spot any errors with these.

The much-anticipated results from the 100m Sprint (as best you could) Leg are in - available from the links below:

This was SYO's first event with contactless mode for SIACs enabled - we hope it all went smoothly for you.

If there are any issues with the results, please This email address is being protected from spambots. You need JavaScript enabled to view it..

Firstly, thanks to our hosts the EIS for allowing use of their arena and facilities, unfortunately the originally planned use of the track was withdrawn at the last-minute post map printing. The track has just been re-laid and has a 6-month stipulation that it can’t be cleaned in this time period and as a result they were concerned after the recent poor weather that dirt would be left on it.

However, I hope the alternative run in was fun for all and better than finishing just outside the building. We had a great turn out with over 210 competitors and I hope you enjoyed the view from the stand over the run in.

As well as the EIS these events cannot happen without an army of volunteers so a special thanks to all of you for volunteering and making it run so smoothly; thankfully those on start avoided the downpours that were originally forecast.

I think the event was highly successful despite a few little glitches with the biggest being the use of the indoor track for the final control. The organiser, Susan, was let down by EIS as they changed their mind on the Saturday after EIS realising the track couldn't be cleaned for 6 months as it was recently laid. Nevertheless, the use of indoor facilities was fantastic and Susan did a fantastic effort especially this was the first time organising an event.

Another minor glitch was the control flag, No 50, went missing during the event. The SI unit was taken at this stage so generally the event continued without a hiccup. I went out to replace it and found the flag now back in it's rightful position. Then over the next 30 mins the SI unit was taken. This didn't affect anyone as everyone had been through. Now knowing this then you can understand why the planner, Martin, chose to use many long legs in order to avoid vandalised controls in the poorest part of Sheffield. I think the courses were interesting and certainly there was a lot of discussion on the best routes for his long legs. Well done Martin & Susan.

Firstly, an apology. I should have planned shorter courses for the Hyper Vets classes (75+), but didn't. I had taken the course list table from the British Orienteering rules, but that hasn't yet been updated to include this extra class for urban events, and consequently our courses (and classes) only went up as far as Ultra Vets (65+). We did add a White course to that list, to ensure we could accommodate the large volumes of Yellow and White runners that have been coming to our local events recently.

I hope everyone enjoyed the challenges set by the various courses. I intentionally aimed to include one or more good long legs with route choice in each of the TD3 courses, mixed with shorter legs in the best parts of the map for intricate navigation. Unfortunately these areas are also the parts of the map most likely to suffer from vandalism, as proved to be the case with control 50. The Light Green was shorter than I would have liked, but was limited by the constraint of not having under-16s cross any roads that might have had signigicant traffic.

It was disappointing to lose permission to run on the track just before the event, but thankfully it was easily managed and we still had the benefit of a great assembly area and changing facilities at EIS.

Finally, some thanks. Firstly to Susan who did a great job as Organiser on her first go, and to Mark as Controller for spotting a few errors I'd made in the planning process, and suggestions for some course amendments. Thanks also to Lesley and Ryan who helped collect controls meaning we were all packed up very soon after course closing time. 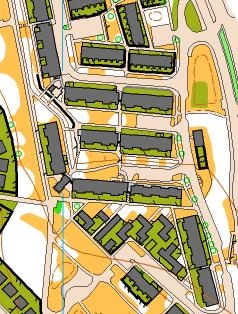