Did anyone pick up a Morrisons bag for life with a jacket in it, one is missing contact: This email address is being protected from spambots. You need JavaScript enabled to view it.

When asked to plan on Big Moor, I was keen to see if it was possible to include the area south of the Curbar Gap road which had not been used since the Northern Championships in 2010, but had some interesting terrain to offer. Having obtained a suitable parking area, it looked like this would work, but gave a slightly awkward start arrangement especially to get the Blue and Brown courses across the road and back.

Given the reaction of most competitors at the finish, most of you seemed to enjoy the courses and the area. It has a good mix of moor, rock and woodland and a quite a few dramatic rock features, one or two of which you may have visited, though it was difficult to achieve any long route choice legs.

Looking at the winning times on the long courses, they were about right, though perhaps slighly short. I had chosen to err on the short side given the time of year and the risk of adverse weather. In the end the day dawned with almost clear skies at 7.30am when we arrived in the area, and the somewhat unexpected snow flurries later on did not seem to cause any major problems.

Apologies for the steep walk back from the finish. I assumed it would be preferable to including it as extra climb in your courses and it may have kept you warm on the way back up if you were not too exhausted after your run!

Finally thanks to Lucy Wiegand for her efficient organisation, to Peter Gorvett for his advice and relaxed approach to Controlling and for his help putting controls out, collecting them in, updating the map and for covering more distance than the planner to compensate for me having severely sprained my ankle a month or so before the event (having a sprained ankle certainly gives a different perspective on negotiating the Curbar edge boulderfields!). Also thanks to Charles Hird for producing the new map layouts for the event, and to Mark Dakin and Jackie Butcher for collecting controls.

It was great to see so many people out. Nearly all the comments I heard were positive, enjoying the variety of terrain in the courses on what for many people was a new area.  It was good to work with Colin Smith.

We are sorry the car park field was too wet. It would have been fine if the temperature had stayed below freezing, but even the few helper cars we parked did start to leave tyre marks in the field when they left. Thank you for tolerating the walks up and down the busy road; the numbers meant some of you will have had more than the 800m we thought would be maximum walk.

Green to Brown: Some commented about the difficulty and the mapping of the slopes, especially below Curbar Edge. The boulder-strewn slopes are very hard to map. It is impossible to map every boulder over 1m, so the mapper must select the biggest boulders to map. The problem is that on such a slope and with the vegetation, boulders which appear biggest from one direction may not appear biggest from another. I suspect that if 10 mappers were to survey the slopes they would all make different decisions. In the immediate vicinity of controls we aimed to check that the feature and its surrounds were OK from the obvious directions of approach. In addition I think Colin selected sites that had a solid attack-point (though not necessarily on the optimum route) or where clear areas could assist navigation. His courses were designed so that up or down to the path, along and back down or up to the control was rarely the best route.

So does it make a fair competition? Some might argue not, but I think it worth continuing to use as it does provide a test of ability to use many skills (distance & height judgment in very slow terrain, judgment and detailed map reading, with assessment of what was mapped as clear when there were leaves on the trees). 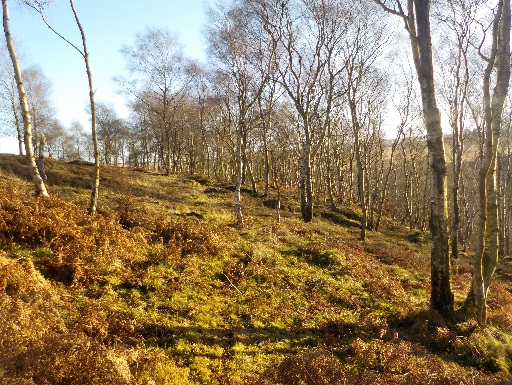 Organiser: Lucy Wiegand (SYO) This email address is being protected from spambots. You need JavaScript enabled to view it. 07952 688968

The Baslow Edge orienteering area consists of an area of gently sloping moorland (Eaglestone Flat), mostly moorland below Baslow Edge and a wooded slope to the South. Eaglestone Flat is much easier going than nearby moorland areas; the remaining areas have mixed runnability. It was used for Northern Championships in 2010 with Big Moor.

Longer courses cross the road onto Big Moor, which includes open moorland, the gritstone edges of Froggatt and Curbar and the steep, wooded slopes below the edges having good rock and contour detail. Runnability is variable, particularly on the open moorland. Although much of the moor is runnable and there is little heather, there are some areas of heavy-going tussocks in the middle of Big Moor. Deer and cattle trods can often be found to speed going.