The History of South Yorkshire Orienteers

The following article is based on Ray Waight's document entitled 'The Formation of the Club' that was included in the club's Silver Jubilee booklet which was distributed to members in 1997. That original document has been extended and supplemented with photos with the help of Ray, Clive Allen and other sources. The article, composed for SYO's 40th anniversary, now covers the first decade of South Yorkshire Orienteers and may be extended at a later date to cover up to the present. Enjoy!

In the late 1960's and early 1970's, orienteers who lived in Sheffield and its surrounding areas usually entered events under the club name of a school or college if applicable, as a member of YHOA, or were members of adjacent clubs such as DVO or Airienteers. In the latter months of 1971, around 60 local YHOA orienteers were contacted and information was circulated at events saying that YHOA were proposing to hold a meeting in the area to see if there was enough support to form a new club based in south Yorkshire (It wasn't until 1974 that boundary reorganisation occurred and the county of South Yorkshire came into being). The meeting was arranged for 1st February 1972 at Lady Mabel College, Wentworth Woodhouse, a girls P.E. college. 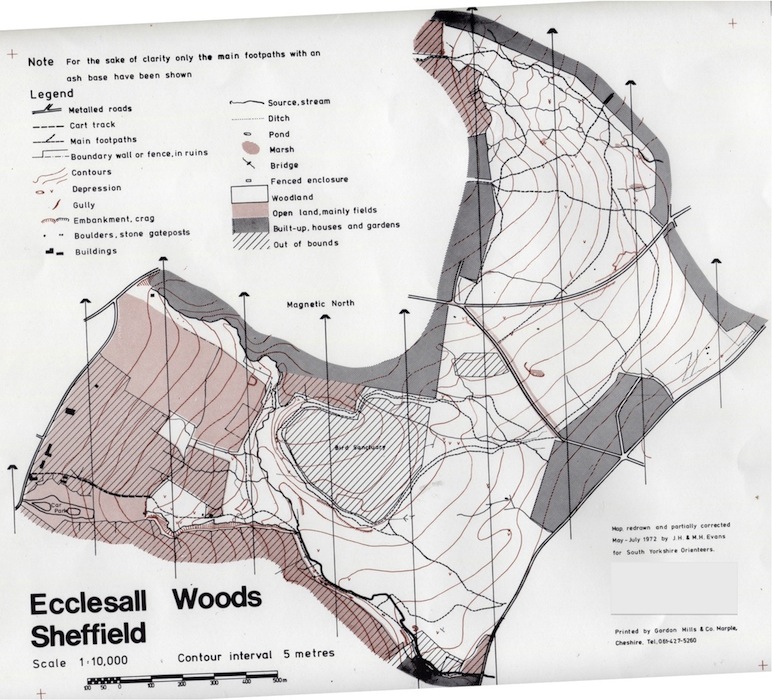 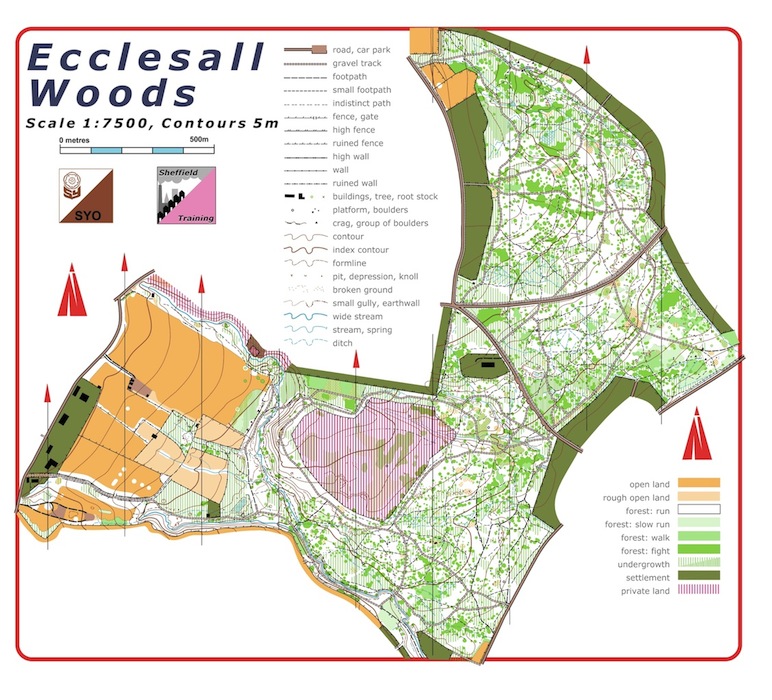 One of those contacted was John Evans who lived quite close to Ecclesall Woods and by profession was a local government engineer and surveyor. His son began orienteering when at school in Surrey and came second in the English Junior Championships at Clipstone Forest (EM) in 1966, while John himself started in 1969, joining YHOA in 1970. During 1971 he produced a black and white map of Ecclesall Woods based on an enlarged Ordnance Survey map and with 5 metre contours interpolated from those at 25ft. This was used for training by local orienteers and in September 1971 a training event was held which although not BOF-registered, nevertheless attracted orienteers from Sheffield and surrounding areas.

The meeting on 1st February 1972 never actually took place. Alan Ross (YHOA Secretary), and Gerard Simpson (YHOA Training & Development Officer) drove down from York through blizzards and snow which had been falling all day, and when after many hold-ups they finally arrived at Lady Mabel College, they found that the few who themselves had managed to turn up had already left for home.

Due to the 1972 miners strike closing the college at Wentworth Woodhouse for a number of weeks and other commitments of various people, it wasn't until 14th June that a second meeting was arranged at which 28 people turned up.

Vic Roberts of Eborienteers gave an introductory talk, the Swedish film 'Thomas the Orienteer' (the only orienteering educational film available in Britain at the time) was shown, and much useful advice on setting up a club was given by Gerard Simpson. A show of hands indicated there was a good response to the idea for the new club. There weren't quite so many people volunteering to become officials though, but eventually Clive Allen (pictured below left), Pat O'Grady, John Evans and a few others formed a steering committee for the new club which would be called South Yorkshire Orienteers.

It was felt that the best way to get to know each other and attract people into the club was to hold an event. John Evans, in the spring and summer of 1972, had done further survey work in Ecclesall Woods and produced a revised map in two colours (shown above right) which was used for SYO's first event on 24th September 1972. Parking and registration was in the Limb Lane car-park with Vic Roberts as the controller and the event had about 300 entries. Notices in two of the local newspapers and on Radio Sheffield helped attract a decent amount of entries from Sheffield. Incidentally, in the results of this event Clive Allen, the acting Secretary of SYO, said that the name 'South Yorkshire Orienteers' was only a provisional one and the committee would be interested to hear from anyone with any other suggestions. Presumably there weren't any better alternatives. 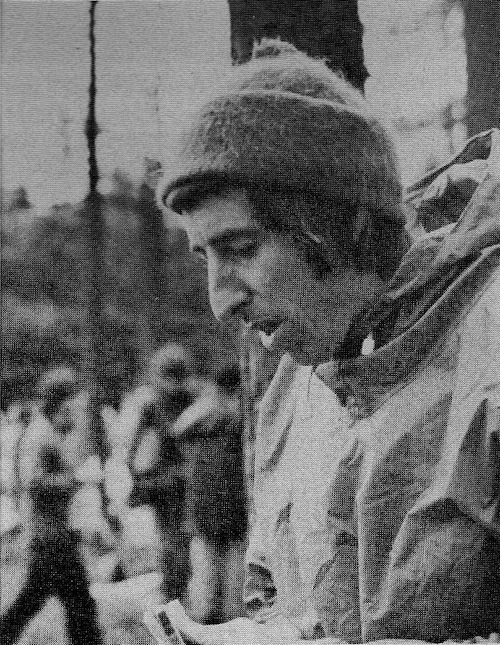 Soon after the first event at Ecclesall 27 prospective members attended the first AGM and the Steering Committee became the first elected committee. At this time club membership was fixed at 30p!

SYO's second open event was on 3rd June 1973 and used the same Ecclesall Woods map as the first. The club decided to set up a series of midweek training events. One of these training events was a night event based at Mount St. Mary's College on a 1:2500 black & white map. During the event Clive Allen climbed through a hedge to get out of the local graveyard that he had inadvertently gone into, only to find himself in the middle of someone's back-garden hen run and a lot of startled hens! Needless to say he removed himself from the area as rapidly as possible.

A key priority of the club's early days was to establish an annual event at a standard which would attract plenty of orienteers from other clubs, bring in funds and help put SYO 'on the map'. At SYO's first proper committee meeting after the first AGM, it was decided to use Rivelin as the venue. Mike Hayes agreed to be main mapper and course planner, Clive Allen was the organiser and Vic Roberts was controller. Mike had already made two previous maps of Rivelin as he lived nearby at the time. This time the map was in 5 colours to relatively modern standards. 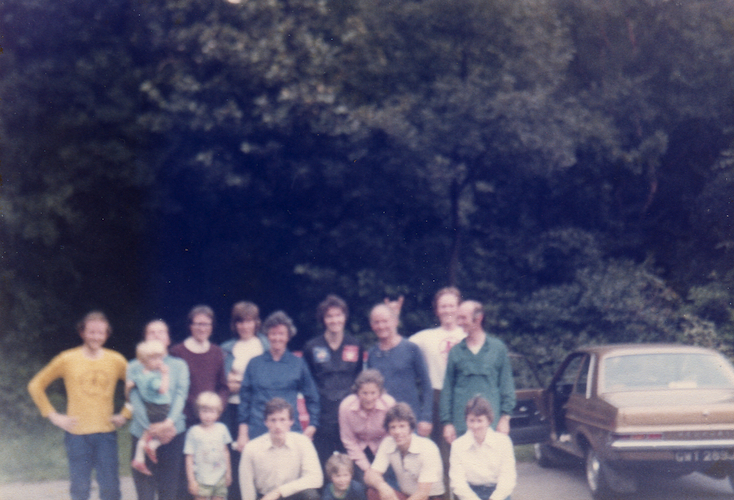 The event, the first City of Sheffield Trophy organised jointly with ShUOC, was held on a fine summer day - 8th July 1973 - with the finish at the back of the 'Three Merry Lads' and the parking in the field beside the 'Sportsman Inn' on the other side of the road (both of which are still around today). The Sportsman did special lunches for the event and there was a splendid post-race atmosphere in and outside.

The event was however marred by an accident: a small boy with his mum and dad, doing the 'Wayfarers' course which went along the path along the top edge of the woods to the west of the Three Merry Lads, wandered out onto the top of one of the gritstone crags and stood on some heather near the edge. Unfortunately this was overhanging the rock and he fell down 3-4 metres to the bottom of the crag, where there happened to be a control with someone punching at it at the time. The rescue services came out and the boy was taken to hospital, but fortunately he had landed in the right way and wasn't much injured, only shocked. That led to some debate, of course, about what could have been done to prevent the accident - it was essentially not an unsafe path, and there were lots of crags like the one he fell down so it would have been difficult to tape every one.

Vic Roberts was, according to Clive Allen, very sceptical about a certain section of one of Mike's courses, where the optimum route was directly down a steep slope between crags. Vic declared it too scary until Mike demonstrated how a really fit orienteer could come down really fast in small leaps! Overall this was a very successful event which was a landmark in SYO's early development. The event got some logistical help and prizes from the Sheffield Corporation, now known as Sheffield City Council. 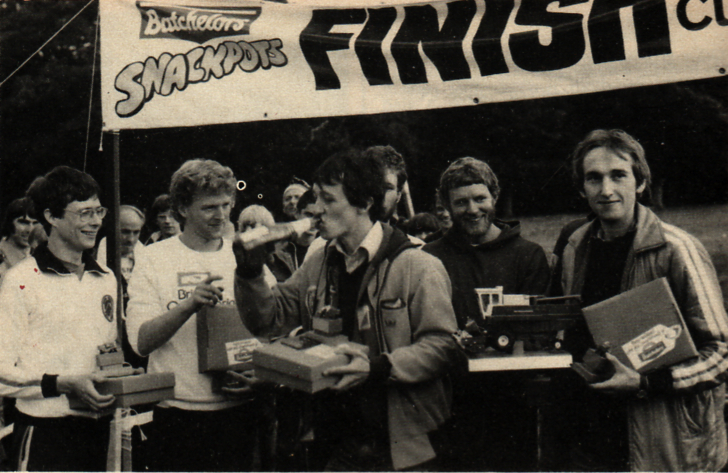 The club went through a poor spell in the summer of 1973 when Clive Allen, the club's secretary and main driving force, moved to Ilkley. Indeed, at the 1975 British Championships which was held at Strines (by DVO), not far from the geographical centre of the club in Sheffield, only 3 of the 700 competitors were from SYO. This may have been as the club didn't contain any elite orienteers at the time so wasn't considered a 'prestigious' club. However, things soon picked up when some ex-ShUOC members joined the club and participation & membership increased. Despite this, from the outside the club was regarded as well established because it was generally very active in event organisation and the City of Sheffield Trophy was an annually well-supported and, in general, a well-organised event.

Over the following years the club continued to organise events and increase its membership. At that time, the White Rose weekend organisation was shared between all the Yorkshire clubs and SYO had responsibility for the 1973 relay on the 26th August in Troutsdale / Wykeham. In April 1978 the club concentrated on its part in JK Festival for which Clive Allen was the overall co-ordinator. The individual race was at Wharncliffe and Greno Woods organised by AIRE and the relay was at Strines organised by EBOR and EPOC. Despite having formed just a year before the JK, EPOC contributed a lot of experience and manpower to the relays. SYO organised the JK Training Event at Rivelin on Good Friday. The club also arranged and co-ordinated the Event Centre, accommodation, the Saturday evening social, and the Hesley Woods camp site.

Despite being a very cold and showery day, the second City of Sheffield Trophy, held at Blacka Moor on 3rd November 1974, had over 650 attendees. The map was 1:10000 using 4 colours and made by John Evans who utilised some 'interesting' aerial survey maps in making it. Penknives were given out as prizes, nowadays this probably wouldn't even be allowed! The third City of Sheffield Trophy was held at Greno Woods on 13th July 1975 and for the fourth it returned to Blacka Moor on 25th April 1976. 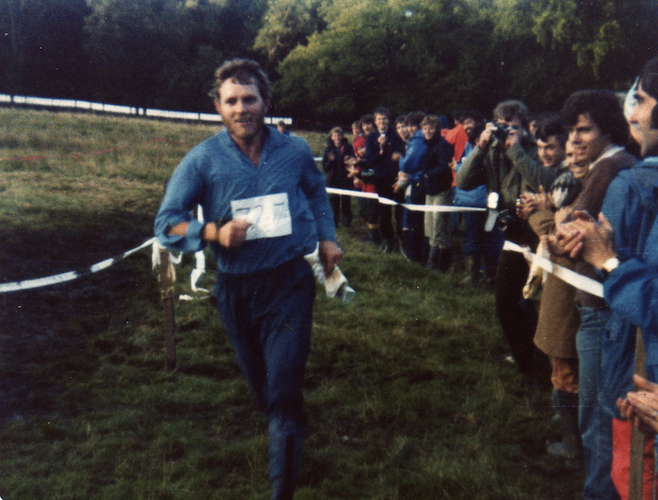 The City of Sheffield Trophy continued as SYO's annual badge event from 1973 until 1985. The City of Sheffield trophy itself was augmented with 2 new trophies in 1981; the Griffin trophy which was given by SYO's new sponsor Midland Bank (now HSBC) for the best family, and the High Sheriff Trophy for the best school team which was donated by 1981's High Sheriff of South Yorkshire to mark his year of office.

Until 1985, the event name remained as the City of Sheffield Trophy but it was not used after then, and only the Griffin and High Sheriff trophies were awarded at the next 4 annual Badge events, possibly because there were fewer schools attending.

The club continued to grow rapidly in both membership, which peaked at 460 in 1993, and achievements as shown in the Hall of Fame. Team successes started with victory in the 1980 Harvester Trophy and continued in the 1980s and 1990s with a clean sweep in 1994 when SYO won the CompassSport Cup plus the Men's and Women's Open at the British Relays, the JK and the Harvester Trophy!