When the 2021 Compass Sport cup Final was in danger of being cancelled for the 2nd year in a row, SYO stepped in to host and were rewarded with a fabulous victory on home terrain!

Over 800 competitors from all over the country descended on Hesley and Tankersley to take part, including 120 members of SYO. There were stand out performances from our 8 course winners - Oli, Laura, Martin, Peter G, Imogen, Euan, James and Ella - who all scored the maximum 100 point score. Congratulations also to our other point scorers - Jonny, Joe T, Chris W, Nick B, Andy, Alex R, Cat, Rachael, Jenny J, Mark C, Richard B, Kim, Colin B, Freya, Max, Charlotte and Anna. We scored a record breaking 2397 points to win over FVO, who finished in 2nd place on 2368, while WCOC had their best result for a number of years to finish 3rd. In the small clubs competition, the trophy was won by SROC with an excellent score of 1261.  Well done to everyone who ran even if you weren't a scorer as your results push down the scores of others and thank you to Amanda for captaining such a fabulous team to victory!

Hesley Woods Scout Camp proved to be an excellent assembly area and Peter Guillaume constructed a fabulous arena from which clubs could socialise and enjoy the race. Nick Lightfoot's commentary team really enhanced the event vibe, backed up by the excellent results service provided by Pete Tryner and Martin Ward. The overall event organisation was masterminded by Paul Bradbury while Karl Marshall planned challenging courses, which made the most of Tankersley and Hesley's technical terrain. The map was clear and accurate thanks to recent updates by Ian Cooper and the whole event was ably overseen by expert controllers Charlie Adams and Graham Louth. We are hugely grateful to this team of key officials who pulled the event together in just 7 weeks - a fabulous team effort. Thanks also to all the members and their families who volunteered on the day, without whom this event wouldn't have been possible.

The 2022 Compass Sport cup final will be hosted by FVO at Devilla near Stirling on Sunday 16th October. Put the date in your diary as we will need to perform our socks off to beat FVO on home turf!

England call up for 8 SYO Juniors 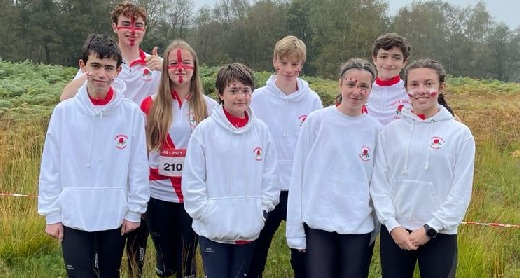 The Junior Home Internationals took place this weekend near Guildford. Eight SYO juniors received an England call-up, making up 1/3 of the 24 strong England team, and all played an important role in helping England win the overall competition.
In the individual competition, Euan finished fastest on M18, while James, Freya and Imogen finished in silver medal position and Anna and Jamie took well deserved bronzes. On the first leg of the Relays Imogen and Jamie continued their good form coming back 1st and 3rd respectively. On the second leg Robbie and Freya both ran the 3rd fastest times on their legs to keep their teams in 3rd place; while James had another excellent run bringing his team up into 1st place, after 2 legs, with the fastest time on the M14 leg. On the 3rd leg Euan ran the fastest time taking his team up to 3rd place and Alex E ran solidly on the W18 3rd leg to bring her team into 7th.
Thanks to Jacky and Jenny L for transporting the juniors and making it a fab weekend for all!

The 2021 Senior Home International was held in Scotland over the weekend of 4th/5th September. The individual race was held on the Sunday at Glen Tanar, a typical tough Scottish forest with the relays on Balmedie, an area of open sand dunes just north of Aberdeen, the day before. Four SYO members were selected to represent England – Jonny, Euan, Pippa and Imogen, although Euan pulled out at the last minute due to illness.

In the Men’s relay two Scottish teams finished 1st and 4th with England in 2nd and 3rd. Therefore honours even in the Men’s relay. In the Women’s relay Scotland finished 1st and 3rd with England in 2nd and 4th so a 2 point advantage to Scotland overnight (and the Dolgellau Bowl for the winner of the first day’s racing). Ireland and Wales each had only one competitive team. The following day Scotland won 3 of the 4 classes (albeit narrowly) to cement their overall victory. The only class not won by Scotland was W20 where England split the points, due in part to a fantastic run by Imogen (only a W16) to take 2nd place.  Pippa and Jonny also had good runs with Jonny taking 4th place in M21 and Pippa finishing 6th in W21.

Thanks to Charlie for managing the team. You can read his full report here.

The junior and veteran home internationals are still to come, taking place over the 9th /10th October and 6th/ 7th November respectively.